The Aston Martin DB5 is a British luxury grand tourer (GT) that was made by Aston Martin and designed by the Italian coachbuilder Carrozzeria Touring Superleggera.[3] Released in 1963, it was an evolution of the final series of DB4.

Although not the first in the DB series, the DB5 is the best-known cinematic James Bond car, first appearing in the James Bond film Goldfinger (1964).

Iconic 1965 Aston Martin DB5 in Original Silver with Claret Interior. This example has to be one of the finest available having undergone a recent full overhaul, respray and engine rebuild which has been fully documented. 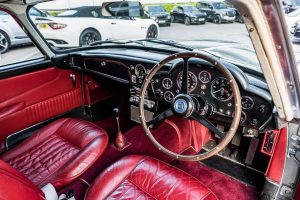 For a letter of introduction to the owner: Aston Introduction